Given two unsorted arrays containing integer numbers, write a function that returns the third array or ot suitable collection (e.g. a list) which is the intersection of the two arrays. This means that the resulting array should only contain elements that appear in both input arrays. Order of elements in the resulting array is irrelevant.

In this task we need to traverse through two arrays, initially unsorted, and find matching elements that appear in both arrays. We do not want to presume any particular traversal, but it would certainly be beneficial if number of times that we access array elements is kept low. On the other hand, space required to run the algorithm should also be reduced, if possible.

Let’s start cracking the problem by providing some very simple solution. For example, we could index somehow one of the arrays, then iterate through the other array. Each element that is found in the index is pushed to the output and simultaneously removed from the index. Critical characteristics of this solution are then space taken by the index and time it takes to insert, find and remove items from it. Most of the data structures that could be used here take space proportional to number of items stored. In terms of time, hash table is probably the best option. It requires O(1) time to insert, find and remove items. If array lengths are n and m, it takes O(n) total time to index one array. Pass through the second array, including finding elements in the hash table would take O(m) time. Finally, removing elements that are found in the hash table would take O(min(m, n)) time in worst case. From structure size point of view, it makes sense to index the shorter of the arrays. Bottom line is that this solution requires O(n+m) time and O(min(n, m)) space. Here is the pseudocode which implements this solution:

Quality of this solution is that it solves the problem in time proportional to just iterating through both arrays - hardly that we could expect anything more efficient than that. However, with memory consumption proportional to size of the array, there is plenty of room for improvements.

In order to reduce memory footprint we could now search for an in-place solution. One very simple algorithm would be to compare each element of one array with each element of the other array. Time complexity of this solution is O(n*m), which is much worse than linear time provided by the hashing solution. But space consumption is now reduced to O(1). Here is the pseudocode:

We could now try to enhance the in-place intersecting algorithm presented in previous section. Our goal is to keep space requirement at O(1), but to reduce time complexity below quadratic time. One way to proceed is to sort both arrays and then to iterate through them in parallel, extracting equal elements along the way. Here is the pseudocode which does precisely that.

This solution possesses several positive properties. First of all, it is more efficient: it takes O(nlogn) time to sort array a, O(mlogm) time to sort array b and O(n+m) time to iterate through both arrays and produce the resulting array. Total execution time is then O(nlogn+mlogm). Space required is still O(1).

Drawback of this solution is that sorting both arrays completely might be an overkill. Consider arrays [1000, 999, 998, ..., 1] and [2000, 1999, 1998, ..., 1001]. We could sort these arrays in roughly 20,000 comparisons (2*1,000*log2(1,000)). But it is obvious that intersection of these two arrays is an empty set, simply because maximum value from the first array is smaller than the minimum value from the second array. Since minimum and maximum values of two unsorted arrays can be found in O(n+m) steps, it looks like there is at least some room for improvement. That is what we are going to try in the following section.

The trick at this point is to partition the second array using exactly the same pivot value. In this way we are producing such state in which whole sections of the arrays are guaranteed to contain disjoint values.

The gain obtained this way is twofold. First, we don't need to compare elements from crossing sections of the arrays: we know that these sections are disjoint and there are no elements that would contribute to the intersection. Second, more important benefit, is that from time to time one of the sections will be empty. In that case the whole corresponding section in the other array can be ignored. That is the real benefit from partially sorting the arrays: parts that are obviously disjoint will quickly be removed from further processing.

Below is the pseudocode for this solution.

Worst case running time of this solution is the same as for full sorting solution: O(nlogn+mlogm). What we are hoping for is improved average running time thanks to stopping condition which ends the processing of parts of the array that do not have an overlapping part in another array.

In this section we are providing implementation in C# for full sorting and for partial sorting solution.

When this application is run, it produces the following output:

Output shows that partial sorting algorithm correctly identifies values that appear in both input arrays. This is not a surprise. But what might surprise many is the diagram that follows. 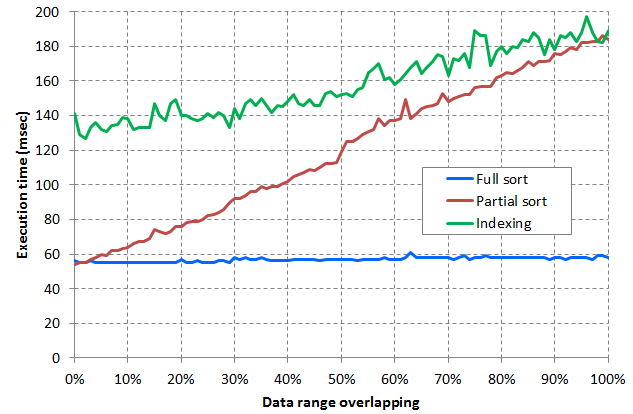 There are several reasons that lead to this consequence. Probably most important one has to do with CPU architecture. Here is the very short explanation of what happens when we iterate through two arrays simultaneously, as it is done in the IntersectionFullSort. (The fact that arrays are sorted plays no role in this analysis.) What CPU internally does when it accesses an array element is to immediately request values from operating memory which immediately follows the accessed location. This is done because there is expectation that application might ask for the nearby data soon, which is absolutely true when iterating through an array. These prefetched values are stored in CPU cache - small but very fast portion of memory, located physically near or on the same chip with CPU. Accessing data from cache is multiple times faster than reading the same data from the operating memory.

Now let's turn to the indexing solution. It first adds all elements of one array to a hash table. Then it iterates through the other array and queries the hash table for each of the values it encounters. While doing that, function pays heavy penalty by not being able to profit on spatial locality of data. Values are scattered around the hash table (that is how hash table works in the first place). Result is that any given value is likely not to be found in CPU cache. This is simply because portion of the hash table which contains the requested value is probably not very near to any other part visited recently.

These processes are very complex in their nature and it is often hard to foresee their effects. But when comparing time needed to iterate through an array with time needed to query the hash table same number of times, result becomes much more predictable. Simple iteration takes advantage of using CPU cache and executes several times faster than the competing hashing algorithm.

Conclusion is that constant factor in indexing solution is so large that it makes the whole function slower than any other, despite the optimistic asymptotic complexity.

But what about the partial sorting solution? It makes less comparisons searching for common values, thanks to its ability to discard whole sections of arrays. But in order to discover which sections can be discarded, this function performs quite a lot of analysis: finding a good pivot and partitioning arrays. Result is again high constant factor, making this function consistently slower than the full sorting solution.

What happened here is what often happens when theory hits the reality. Execution time is not the same as asymptotic complexity. It is not even proportional to the expression depicted by the asymptotic complexity, but the proportion varies with dimension of data set at hand. Shortest and most elegant solution has won the competition. It relies on sorting function borrowed from the framework, function which is beyond any doubt highly optimized.

Moral of the story is that most optimized algorithm is not necessarily the fastest one. It's often the other way around. Short code with simple flow, like iteration, which relies on built-in functions is often the fastest one in practice, despite the slight handicap in terms of asymptotic complexity.