There are N cards in the deck. Write the program which shuffles the deck so that all cards are evenly distributed over multiple shuffles.

When speaking of shuffling a sequence of numbers, we can come to a difficulty to explain what does the shuffling mean in terms of distinguishing "well shuffled" from "poorly shuffled" sequence. Take two numbers: 1 and 2. Is the sequence [1, 2] shuffled? Or is the sequence [2, 1] shuffled better? Don't be tempted to believe that the latter one is, so to say, better than the previous. Better stance for comparing sequences would be to ask the following question: How often does the shuffling process produce sequence [1, 2] compared to sequence [2, 1]? Basically, it is not the sequence that is considered shuffled or not, it is the algorithm which produces proper or improper shuffling. So we are now stepping aside and looking at the sequence of sequences produced by the shuffling algorithm. It should be obvious that both sequences are legal when shuffling two numbers. It only remains to see whether shuffling algorithm produces these sequences in a sufficiently random manner.

Now we have seen three criteria for analyzing the shuffling produced by an arbitrary algorithm. We can devise an enhanced algorithm that performs perfectly on all three criteria, but then still find out yet another test on which it fails, namely to find one particular property of perfect shuffling (whatever should it be) that the algorithm does not satisfy. So what should we do? The answer is quite simple: Proper shuffling algorithm should not bother about conditions and criteria that sequences should meet, but it should better think of how to satisfy distribution of numbers within each particular sequence. Should this distribution be "honest", or in formal terms: unbiased, then we would rest assured that all sequences produced by such an algorithm would natively be well shuffled. In literature, you will find definitions of proper shuffling that range from trivial to very general, so general that they cannot be fully applied in practice.

For example, consider this criterion: A sequence is random if it has every property that is shared by all infinite sequences of independent samples of random variables from the uniform distribution.

Well, this sounds as if it has embodied all the possibilities. Should the theoretically perfect sequence have any property that it satisfies, then well formed algorithmically-produced sequence should definitely pass the test of that particular property. But alas, this definition is so broad that it cannot possibly be applied in practice in its full extent. (On a related note, this statement was given by Joel N. Franklin in a paper published in Mathematics of Computation journal back in 1963.) To bridge the gap between theory and practice, different authors have devised quite an impressive suite of tests that can be applied to sequences in order to measure their "properness".

It is beyond the scope of this article to discuss these tests. Further on we will focus on devising an unbiased algorithm and hope for the best when its output comes to the testing phase.

In the previous section we have identified pitfalls that threaten the shuffling algorithms. Simple conclusion on how to avoid the pitfalls is to code a simple unbiased algorithm. Whichever bias is introduced in order to avoid problems regarding some sequence test, that bias will become the root cause to falling another sequence test. So it's best to avoid them as a whole.

Shuffling algorithm that does not introduce any bias is the one that attempts to place numbers to positions in the array in such way that for any given position all the numbers are equally (and independently!) likely to be placed on that position.

So let's start with the first position. We have N numbers awaiting to be shuffled, we need to pick one to place it on position 1. If we pick any of them at random and place it on position 1, then position 1 is filled in an unbiased manner. This leaves us with N-1 numbers remaining and N-1 positions to be filled. If first position was filled properly with this algorithm, then why not to apply the same thinking to the second position? Let's pick up another random number out of N-1 and place it on the second position. Now we should stop at this point to think again - is there any dependency induced between the two numbers that were picked up? Does the first number somehow affect the selection of the second one, because if it does then our algorithm is bound to fail. To see whether shuffling of the first two positions is really random, we should calculate probabilities that any numbers out of N are placed on the first two positions. We start from the stance that random numbers generator used to pick one out of N and then one out of N-1 numbers is unbiased - this is actually a fundamental requirement.

Probability that any number out of N is picked for the first position is 1/N. Probability that any other number is picked up for the second position is then determined by a sequence of two events: first, that this number was not picked up in the first draw out of N and second, that the number was picked in the second draw out of N-1. We could write these two probabilities as following:

These expressions show probability that any given number occupies position p after shuffling has taken place. Note that we could multiply the probabilities for p=2 because these probabilities are independent - it shows how important is the prerequisite that random number generator produces independent numbers. Now we can extend the analysis to any particular position k between 1 and N: a number is not picked in any of the steps before k, and then it is picked up in step k when only N-k+1 numbers remain to be shuffled: 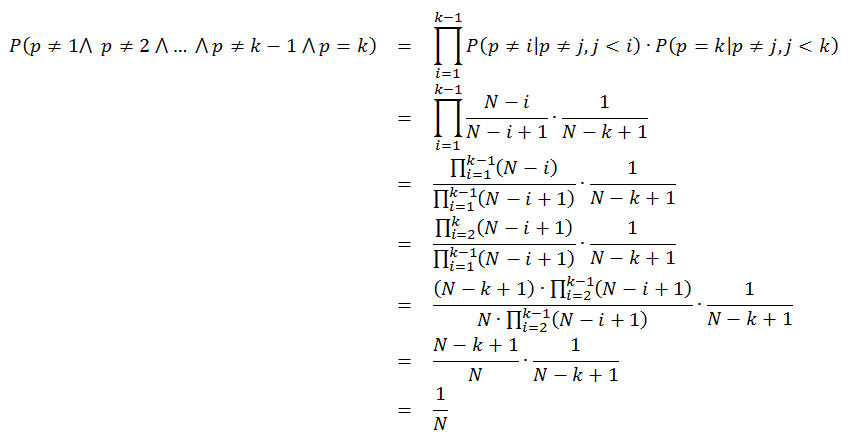 From this analysis we can conclude that the proposed algorithm indeed shuffles numbers in an independent way - any number is equally likely to be placed on any position in the output sequence and its placing there does not depend on placing of any other number in the sequence.

Now that we have all the elements, we can write down the algorithm. Only one small modification will be made, dictated by the technology - we will first solve the number at position N, then at N-1, and so on until position 1 is resolved. The reason is quite simple - we're dealing with random number generators that generate numbers between 0 and K for any given K, which then saves one arithmetic operation that would be required to shift the range into N-K thru N. Here is the algorithm:

That is all. Note that there is no need to shuffle the number at position 1 in this implementation because that is the only number remaining - it is already shuffled by definition, so to say. For further reference, this algorithm is known as Fisher-Yates shuffle. There are some other algorithms available, some of them meeting other needs (e.g. to generate two arrays - non-shuffled and shuffled), but this one presented above is quite sufficient in most of the practical settings. It shuffles an array of numbers in time proportional to length of the array and also shuffles it in-place so that no additional space is needed.

Implementation of the Fisher-Yates shuffling algorithm is straight-forward and we will step into it without further deliberation.

Below is the output produced by the shuffling code.

On the first glance arrays indeed seem to be shuffled. But to be more certain we would have to apply several randomness tests, which is full heartedly suggested as a stand-alone exercise.

Now that we have completed an initial run of the algorithm and obtained a few shuffled sequences out of it, the reader is suggested to turn attention to analyzing the results produced.