Finding Arithmetic Expression to Construct a Value from Given Numbers

Combining two expressions actually means to apply all operators that are applicable. Basically, addition, subtraction and multiplication can always be applied. Only division is questionable - it is applicable only if results of two expressions can be divided without remainder. Addition and multiplication are commutative (a+b=b+a and a*b=b*a), meaning that order of operand is not important. Subtraction and division are not commutative, meaning that they can be applied in two different ways for each pair of expressions. Consequently, we have a total of six possible operations that can be applied to any pair of expressions. In other words, one pair of expressions can be expanded into up to six other expressions. For example, suppose that values 3 and 6 are available. These two values can produce: 3+6=9, 3-6=-3, 6-3=3, 3*6=18 and 6/3=2 - total of five new values. We cannot divide 3 by 6 using integer division. Even more, we can reject expression 3-6=-3 because it can always be reached in the opposite direction - by subtracting the result of expression 6-3=3 from any other expression.

By this point we have decided how to construct larger expressions from smaller ones. But now we have a problem of a different sort: there are results that can be constructed from same set of numbers in more than one way. For example, if there are numbers 2 and 2, we can create number 4 as 2+2 or 2*2. It could be a serious problem should we repeat all subsequent calculations for the second form. Number of multiple paths that lead to the same value would quickly start to build up. Take a similar example, numbers: 1, 2 and 3. These numbers can produce value 5 in quite a few ways: 2*1+3, 2/1+3, 2+3*1, 2+3/1, 2*3-1. There must be a way to detect that these three numbers were employed to reach value 5 (e.g. like 2*1+3) and then to discard all subsequent solutions to the same problem. So the next element of the solution is to make sure that all values produced are remembered in a kind of a cache, all in order to discard further solutions to the same partial problem. But note that expressions 2+3=5 and 2*1+3=5 are different: they differ in numbers that are used to construct them. Generally, two expressions are considered the same (in terms that they carry the same information) if they have the same lists of input numbers and produce the same value.

Complete algorithm that solves the problem is now very simple:

Now that we have decided on algorithm that solves the problem, we need to discuss implementation details. Namely, we have to answer the following questions:

In each of these segments there can be many viable solutions. Generally, the simpler the better. Answer to first question, how to represent an expression, can be as follows. Each expression is defined recursively by pointing to two expressions that represent left and right operand and by specifying the operation applied to the two. In addition, expression carries its value (which is generally redundant, but quite useful to avoid constant re-evaluation of all expressions during algorithm execution). One more redundant information comes handy: a list of input numbers used to construct the expression (this list is redundant because it can be constructed recursively by joining corresponding lists of the operand expressions). Recursion stops at input numbers - each number is treated as an expression which does not have operands or operation - number defines its value and it is the sole element in the list of numbers used.

Second issue deals with identifying expressions. As already explained above, two expressions are considered equal if they share the same set of input numbers and have the same value when calculated. This leads to an idea that input numbers could be remembered as a bit-mask which would then be combined with expression value. Each bit in the mask indicates whether corresponding input number participates in the expression. This is the point when an example would come handy. Let input numbers be 1, 2, 3, 4 and expression 2*1+3=5 should be encoded. Numeric code which corresponds with this expression is shown on the following picture. 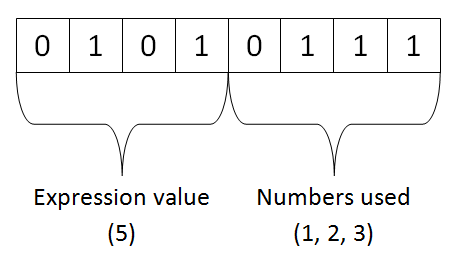 Lower four bits of the number are dedicated to input numbers - three bits one indicate that corresponding numbers (1, 2 and 3) are participating in the expression, while fourth bit zero indicates that the remaining input number (4) does not take place in this expression. Bits above the fourth position contain value obtained when expression is evaluated (5 in this case). Note that expression 2/1+3=5 has the same signature, and that is exactly what we wanted to obtain.

Now that all technical difficulties have been dealt with, we are ready to provide the full source code of the solution. The source code is commented so that it can be read apart from the algorithm provided above. It is given in the form of C# console application which depends on a couple of .NET Framework classes (hashtable, dictionary, queue). But these classes are only collections with well known behavior, meaning that you could rewrite the solution to any other programming language or framework easily.

When source code provided above is compiled and run, it lets the user pick the input numbers and the desired output number and then attempts to solve the problem, printing out the expression if one is found. Below is the demonstration of our algorithm in action.

Readers are suggested to build upon this solution and work up solutions to extended tasks: